What is Overwhelm? How Does it Feel? 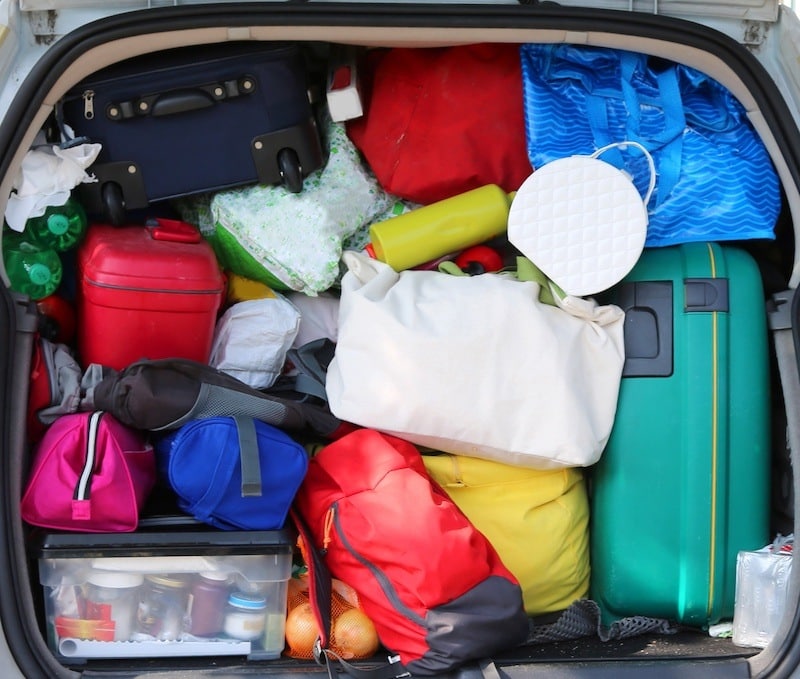 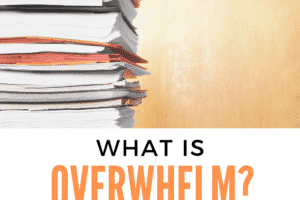 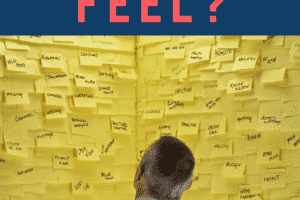 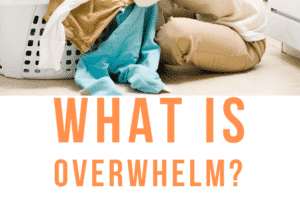 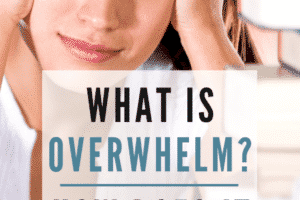 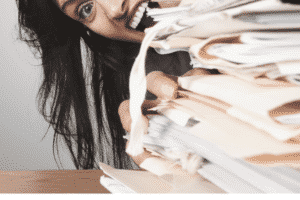 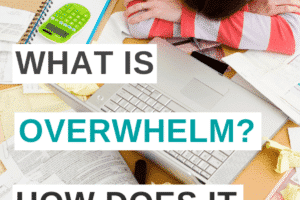 My research into the topic of overwhelm has, to be honest, been somewhat overwhelming itself! There is so much guidance and advice surrounding the topics of stress and burnout that it’s hard to know where to begin. So, let’s start simple.

Understanding What’s Going On: What is Overwhelm?

Overwhelm is a manifestation of stress.

Regardless of whether you are talking about the stress the noun, or stress the verb – the feelings at the heart of stress all relate to the same thing:
Feelings of mental and emotional strain and tension usually resulting from demanding circumstances.

Over the years much scientific effort has been exercised in the study of stress, its causes (stressors), and manifestations.  Hungarian-born endocrinologist Hans Selye first explored the concept of stress, originally known as General Adaptation Syndrome (GAS), as he investigated the way that organisms responded to differencing demands of both a positive and negative nature.  Seyle’s work on stress yielded an entirely new field of medical and psychological research which continues with new advancements to this day.

Selye devised the theory of ‘good’ stress, known as ‘eustress’. Eustress is seen as a motivator, giving us a sense of success and contentment.  Put simply, eustress is the positive response we make to a challenge that we feel able to cope with or motivated or excited by – such as starting a new job, having a child, or speaking in public.

Ever heard the phrase ‘I work better under pressure/stress’?  Well, that’s because these people are referring to eustress and our natural positive reaction to it.

Again, as with any form of stress, individuals experience eustress for vastly differing reasons.   More about eustress can be found here.

Seyle also coined and explored the concept of ‘distress’, bad stress, and thus the opposite of eustress. He noted that the impact of distress was far greater and more damaging on the human body and psyche than the good caused by eustress.

Seyle also found that the approach was taken by individuals as a response to their distress often had vastly differing outcomes. This was further investigated by renowned psychologist Richard Lazarus who concluded that personal perception and evaluation was a critical determinant in this. In other words – if you think you can cope, you usually can and vice versa.

In this article, we are going to explore the manifestation of stress that many people refer to as ‘overwhelm’.

A Google search on the keyword ‘overwhelm’ initially reveals a plethora of definitions and very little upfront on overwhelm as a concept or condition. As a 42-year-old working mum, it’s a word I hear often – both from my own mouth and that of my peers. In fact, friends and colleagues without dependents will often tell me that they feel this way, and rationalize its cause to be the pace of life in the modern world. Anyone of us, in any situation, can feel overwhelmed.

As with stress, the concept of overwhelm can mean different things for many people. Despite the common adoption of this term into the lexicon of busy people, clear scientific or medical classification is scant, and there is no clear definition that places ‘overwhelm’ at a particular point on a stress scale.

For the purposes of this article we are referring to ‘overwhelm’ as:

An emotional state in which you are struggling to cope with or deal with your current situation. This state is often characterized by feelings of:

These feelings are usually accompanied by issues of volume i.e. that there is simply too much going on to cope with, and there just aren’t enough hours in the day.

Being overwhelmed is a deep emotional response to countless thoughts and experiences.

This article will focus on developing your understanding of the symptoms of this kind of overwhelm and its sister article will suggest some strategies in order to deal with the issue.

For some people, their concept of ‘overwhelm’ is much more serious and can leave them asking much deeper questions of themselves. It is critical that these people seek appropriate advice, guidance, and support from a qualified medical professional who is trained to give the support needed. This article is not intended for people in a chronic state of overwhelm. This very deep-seated feeling of overwhelm can be a common symptom of anxiety and requires specialist support.

Most people can remember a point in their life (it may even be now) when one or more of the following occurred. We…

When people say that they feel ‘overwhelmed’ they will often follow this up with ‘I am drowning …..’.  That feeling of struggling to keep your head above water or being trapped.

We often feel that there is no time to catch our breath and have an abiding sense of fear that, at any point, our lives could become unraveled. Like sitting on a cliff edge that you could fall off at any moment.

So why are so many of us Overwhelmed?

For starters, the pace of modern society, technology, and automation has a lot to answer for. The speed at which we live our lives is remarkable when compared to human existence only 50 years ago. The instantaneous nature of email and the uprising of the mobile phone means that everything can happen at break-neck speed. We often see a rebellion to this as we see more people opting out of the rat race for a life ‘off-grid’.

Busy people also tend to fast-forward their lives. We count the days to the weekend or the nearest holiday. We wish our lives away. Ambition and the challenges and pressures of existence in modern society – a constant striving to achieve, do the best by our families and up-size the house – all add to the pressure.

So many of us yearn for simple contentment and to be unencumbered but feel unable to achieve this as a result of the obstructions of daily existence and survival in modern society.

Some scientists suggest that the feeling of overwhelm is more prevalent in some groups, such as working parents, although it is not an uncommon feeling. Most people, no matter how short-lived, will feel this way at some point in their lives and it can be triggered at any time.

“One causal factor may be multiple significant life issues, challenges or transitions occurring in rapid order. Another related factor might be a lack of coping resources, such as supportive, caring friends, families, or communities; rewarding involvements outside of work-life; appropriate self-care or stress management skills; or, sometimes, a lack of a sense of overarching meaning or purpose in one’s life.

Often there is a powerful ‘cocktail’ of stressors and powerful emotions that lead to the subjective sense of being overwhelmed…. There is often a powerful unconscious component to an overwhelmed state.”

Common causes of issues that may lead to emotional overwhelm include:

What is critical to note here is that overwhelm can happen to any of us and it is NOT a sign of weakness.

The impact of being Overwhelmed

It is a simple fact of life that we all need an element of stress to be able to survive. At the end of the day, it’s our innate response that will protect us when we are in danger – even without thinking about it. But too much stress and overwhelm is not a good thing.

The consequences of living in a constantly heightened state of stress can be dramatic. In addition, being constantly overwhelmed has a significant impact on your cognitive functioning. It is a fact that your thinking skills will be slower and impaired when under stress. Have you ever wondered why you can’t remember things when you were overwhelmed, stressed, or in a pressured situation?

As we have already ascertained, productivity when in a stress mode is dramatically reduced. It is vital therefore to tackle the sources of our stress swiftly, to stop the overwhelm and, furthermore, to prevent this escalating as you become further behind.

The danger with overwhelm is that we can live with it rumbling on in the background for years until finally, it catches up with us. In this circumstance, a significant event may trigger such a strong reaction within us that our already depleted reserves don’t have enough to draw on.

The good news here is that there is lots that can be done. More of that shortly.

How to Recognise the Symptoms of Being Overwhelmed

No two people will have the same symptoms when experiencing overwhelm. However, there are certain common feelings that many of us will be able to identify with. Many of these are inter-woven. These are just some examples and this is not an exhaustive list.

1. Your sleep changes. You may…

2. You lose your sense of perspective

3. You are constantly tired. You cannot get ‘on top of it’

4. You constantly multi-task and procrastinate. You…

5. You find very few things good fun, you don’t have time for fun anyway. You…

6. Your attitude towards food may change

8. The control freak turns into a monster

As Seyle and Lazarus discovered, and as outlined at the beginning of this article, the solution starts with us and our perspective on our issues.

Quite simply, our approach to the matter can be the deciding factor between whether we can cope or not and can make things harder than they need to be.

Many overwhelmed people feel guilty or like a failure because they see themselves as not able to cope with life when others seemingly can. Let’s be honest here – we NEVER get a true and honest view of the lives of others. Do not compare yourself because you do not know their story. Everyone at some point in their life will have a sense of overwhelm – it is normal, and it is not a sign of weakness. Thus, the first action is to forgive yourself and admit that you have an issue.

The second stage is to make that conscious decision that you simply do not want to live in this heightened state any longer. Change comes with the first step – make the decision.

Now head on over Part 2 – How to Take Decisive Action to Conquer Overwhelm.

As always, we are interested to hear your thoughts.  How did reading this article make you feel?

Let us know your thoughts below.  Your observations may inspire someone else who needs help to act.

Have a look at these articles from across the Web:

What is Stress?  What’s the Definition of Stress?

Feeling Overwhelmed: Symptoms and their meaning for Your Life

How To Find Your Support Squad

3 Ways Setting Goals Can Help You Achieve A Productivity Increase

Are You Tired of Worrying?

Disclaimer – This article is not intended to be a replacement to professional medical advice, diagnosis, treatment or therapy. I am not a medical professional. If you have any concerns about your physical or mental health and/or wellbeing you must always consult with your doctor or other appropriate health care professional

Lifestyle Habits And Your Mental Wellbeing
May 27, 2022

5 Common Unhelpful Thinking Styles That Can Affect How You Feel
February 16, 2022

What I’ve Learned Since Quitting My Job To Start My Own Business
February 16, 2022

How To Set And Enforce Healthy Boundaries
February 10, 2022